Months into the zombie apocalypse, Andy (Freeman) has 48 hours to live after being infected with the undead virus. Desperately racing against the clock, he must traverse a hostile landscape in search of a new caretaker for his baby daughter.

Cargo is a definitively Australian iteration of the very familiar Z-poc scenario – with its distinctive Outback setting, a musical score that invokes the unique style and tones of the sprawling continent-nation, and, most notably, a reflection upon the relationship and history between the land’s aboriginal inhabitants and the descendants of its European colonists. Between that and its ruminations on parental bonds and responsibilities, it is more assuredly a slowburn drama with horror elements than a capital ‘Z’ Zombie movie.

And oh, how slow it burns. Cargo is a film that really takes its time in establishing its stride. Much, if not virtually all, of the film’s first hour is a pain-staking setup of Andy’s precarious situation. While I would expect nothing less than a solid performance from Martin Freeman at this point – and he does deliver – the character himself is not a particularly compelling protagonist beyond his sympathetic quest. It’s through a rather bumbling sequence of bad decision-making and poor communication that he finds himself in such dire straits, so the movie is not well benefited by such a lengthy examination of these events. Andy does encounter some other people along his way, but they have little to offer in terms of generating interest. By and large, they are your typical stock survivors – the paranoid one, the optimist, the ruthless pragmatist – so ultimately, much of the runtime of the first two acts plays like an uninspired pilot episode of The Walking Dead: Australia, except the hero is carrying a baby on his back and is very close to impending doom. 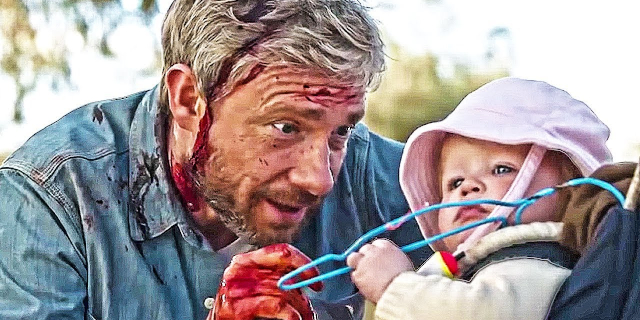 It’s a frustrating endeavor, because there did appear a way to circumvent this rather lagging pace. Occasionally, and very briefly, Cargo cuts away to follow a young aboriginal girl Thoomi, played by Simone Landers, doing various things without either dialogue or context before returning to Andy’s story. These interludes are quick and contribute little to the proceedings beyond interrupting the momentum of Andy’s lackluster travails. However, they suggest the existence of coinciding events that could have been expanded upon to develop an equal half, reducing the need to pad Andy’s narrative so heavily. The paths of these two protagonists do eventually cross, and when that happens, the film finally realizes its potential with a far superior third act. Had Thoomi’s story and circumstances been explored to a similar extent as Andy’s, many of the movie’s climactic moments may have landed with even greater impact while making it less of a trudge to get there.

Cargo does really come together well though. The film’s final stretch is a worthwhile payoff for that which preceded it – perhaps not enough to erase all its foibles, but certainly enough to warrant sitting through them. While I haven’t been terribly kind to the structure and characterizations in her script, writer/director Yolanda Ramke and co-director Ben Howling have collaborated upon a visually striking movie. Aesthetically, they counter-balance desolation and beauty in such a way that it allows the story’s deeper themes to flourish and truly be appreciated, and veteran cinematographer Geoffrey Simpson deserves a nod in that regard as well. Freeman and Landers, once finally brought together, forge a fascinating odd-couple dynamic built upon a shared need to trust the other, but without much cause for that mutual trust. Their converged story and the eventual conclusion make for a difficult but hopeful introspection on the history and status of race relations in Australia and the enduring legacy of indignities suffered by the aboriginal peoples inflicted by European colonialism. In that sense, Cargo carries forward the spirit of the George A. Romero zombie movie, using the now-classic archetype to explore complex social and cultural issues with an undead allegory.

This image is representative of Cargo at its highest moments – when it’s an examination of two people from very different backgrounds overcoming differences in a shared struggle for survival against difficult odds.

In all, Cargo is a film with issues of both the profound and troublesome varieties. When it’s at its best, in the last 30-40 minutes, it’s exceptionally well-made and presented, succeeding in drama, suspense, and spectacle. When it’s at its worst, it’s a dull shamble through the desert, making it a greater chore than necessary to get somewhere .

Cargo gets a rating of