A coroner (Cox) and his assistant son (Hirsch) are urged by the local sheriff to perform an emergency autopsy upon a mysterious corpse (Kelly) who has no apparent cause of death, signs of physical trauma, or connection to a brutal crime scene. As the night progresses and a vicious storm rolls in, they’ll learn that some secrets are best left undiscovered.

The Autopsy of Jane Doe is an unorthodox paranormal tale with loads of clinically graphic content. While there’s little violence and nothing sexual, the realistic depiction of autopsy procedures may leave some viewers reeling. Aside from that, the focus is on eerie atmosphere, well-orchestrated jump scares, and the progression of a mind-bending mystery.

It’s an attempt at a mind-bending mystery anyway, but I’ll get to that more in a bit. The Autopsy of Jane Doe strives to be a claustrophobic creeper that puts the spotlight on the most overworked yet rarely seen characters in horror – the coroners. They generally toil away in the hidden subtext of a story, overwhelmed with a grisly influx of some psychotic or supernatural carnage, and when they are featured, they’re usually killed off quickly to set up or establish a sequel or they have a couple of speaking lines in between bites of that sandwich that movie morgue workers are always eating. Here, they get an entire feature and story of their own, and, for the most part, it’s a riveting success.

It’s actually a novel concept for a number of reasons. The Autopsy of Jane Doe holds back little in its portrayal of an actual autopsy procedure, and that gory authenticity forms a squeamish foundation upon which more traditional scare sequences are executed with greater effectiveness. This is kicked off early with an introduction to the main characters as they wrap up work on a grotesquely roasted burn victim, and its unsettling effects linger on even after he’s been drawered up and the emphasis shifts to more mundane exposition. Even throughout the more ordinary formalities of the first act, many elements are introduced that are exploited later on with chilling results. The horror craft on display in this film leads to numerous well-earned moments as the story continues on. 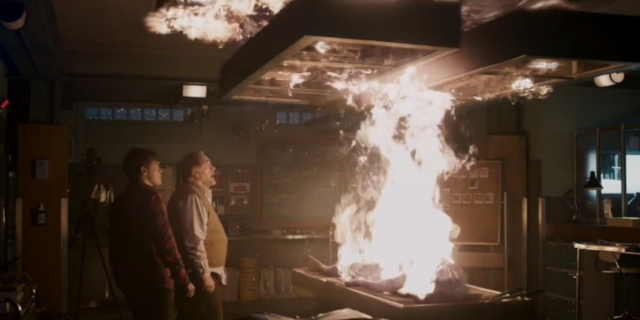 I’m not a doctor or anything, but I’m pretty certain this is not a typical autopsy.

It’s also intriguing how the autopsy itself is transformed into the central narrative device, and rightly so, given the title. As senior coroner Tommy Tilden, yet another reliably solid performance from Brian Cox, explains for the sake of their video documentation that the autopsy will be performed in four stages, it is through each of those segments that the plot moves forward, the stakes are raised, and some new disturbing revelation is made – it’s great fundamental storytelling. Further, Jane Doe herself grows ever more compelling as events unfold. Mute, motionless, and naked as a jaybird, it’s rather amazing how much personality she ultimately projects, and speaks to both a fantastic character performance by Olwen Catherine Kelly and the movie’s adept structuring to help her out. She is a corpse on a table, after all – what could she really do?…

Director André Øvredal really impresses with this effort. Whereas he displayed a great talent with large-scale in 2010 must-see Trollhunter – which is fantasy-horror as a fun adventurous romp among dangerous giants – he shows amazing finesse in the fine elements of the genre with The Autopsy of Jane Doe. He demonstrates extensive attention to detail, excellent pacing, and an ability to generate an ever-thickening atmosphere of oppressive dread. He’s at the helm for the upcoming Guillermo del Toro-produced adaptation of classic ’80s youth horror anthology Scary Stories to Tell in the Dark, and he may very well bring some genuine terror to what will almost certainly be a PG-13 rated outing.

Now, I started off by stating that this movie was an attempt at mind-bending mystery, and it’s with that we come to its greatest flaw. At the moment of the big answer to the sinister puzzle driving the entire story, the film trips, hits its head on a table, and collapses to the floor with a clumsy thump. The leap that needs to be taken to arrive at the conclusion begs disbelief, as does the conclusion itself. However, it gets back up and stumbles onward to the finish line, somewhat worse for the wear, but it’s a testament to the quality of the rest of the film that it’s not a deal-breaker. This is still an exceptional feature and certainly among the better offerings from 2016.

The Autopsy of Jane Doe gets a rating of

Some more stuff to read if you want:

One thought on “The Autopsy of Jane Doe”